While the court ultimately denied Williams’ request for a new trial, the ruling goes to great length to explain the racist past of Oregon’s history generally, as well as concluding that race and ethnicity were motivating factors in the passage of Oregon’s non-unanimous jury law and that “the measure was intended, at least in part, to dampen the influence of racial, ethnic, and religious minorities on Oregon juries.”

While it is heartening to read the court’s meticulous analysis properly placing Oregon’s non-unanimous jury law in the context of our state’s racist history, today’s ruling denying Mr. Williams a new trial is heartbreaking. It reinforces how difficult it is to remove the racial bias baked into our criminal justice system. The ACLU of Oregon will continue to fight to change Oregon’s non-unanimous jury law.
The full opinion can be accessed below, under "Documents."

November 23, 2016 - Anywhere else, a 10-2 jury vote means a hung jury. But not in Oregon or Louisiana. Here a 10-2 jury is enough to convict felony defendants. This morning, the ACLU of Oregon and the Oregon Justice Resource Center were in court supporting a challenge to the Oregon law that allows for non-unanimous jury convictions, arguing that it violates the Equal Protection Clause of the federal constitution.

In both states, the laws allowing non-unanimous verdicts are steeped in racist and discriminatory intent. Oregon's constitutional amendment was born from xenophobia, while Louisiana's targets Black men. 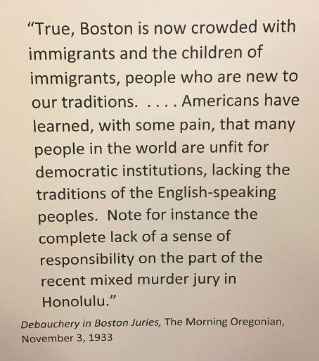 Oregon's law, passed via ballot measure in 1934, reflects the anti-Jewish, anti-Catholic, and anti-immigrant sentiment of the time. The discriminatory law followed public outrage when a Jewish defendant was convicted of a lesser crime due to a holdout juror in a high-profile case. At the time, the Morning Oregonian newspaper openly stated the discriminatory basis for the law, opining in support of the ballot measure by writing “the vast immigration into America from southern and eastern Europe, of people untrained in the jury system” made “the jury of twelve increasingly unwieldly and unsatisfactory.”

In a state like Oregon where Whites make up the vast majority of the population, juries rarely get more than one non-white juror.  So, under the law, Oregon courts may enlist non-white jurors, but they are then effectively locked out of the deliberation room. We filed a friend-of-the-court brief in support of defendant Olan Williams’ request for a new trial due to his conviction by a non-unanimous jury. Williams, a Black man, was convicted with one hold-out juror. The vote to acquit came from the only Black juror, but her voice and vote were silenced.

Studies cited by ACLU of Oregon and Oregon Justice Resource Center in their friend-of-the-court briefs show that jurors are more likely to convict a defendant of another race, due to conscious and unconscious prejudices, or what is known as implicit bias. Silencing minority jurors amplifies the effects of implicit bias as minorities are already significantly underrepresented in Oregon’s jury pools. Allowing non-unanimous jury verdicts functionally removes minority jurors altogether.

Jurors required to reach a unanimous verdict report being more satisfied and confident that they reached the correct verdict. When juries are not required to be unanimous, they tend to rush through their deliberations, taking fewer polls and ceasing deliberating when a quorum is reached, and take less time to reach a verdict. 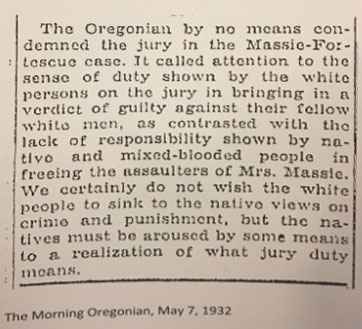 Oregon’s criminal justice system has high rates of racial disparities at every stage from arrests to prosecutions to severity of sentencing. Non-unanimous juries perpetuate the problem. A report leaked this February out of Multnomah County, the state’s most populous county and the home of most of Portland, showed that Black people were more than four times more likely than whites to be convicted of a crime, five times more likely to spend time in jail, and six times more likely to be sentenced to prison.

Allowing non-unanimous jury verdicts silences minority voices, amplifies implicit bias, and perpetuates racial disparities. The discriminatory law that allows for non-unanimous juries goes against the heart of the American court system - that fundamental idea that all people have a right to a fair trial, judged by a jury of their peers.

Circuit Court of the State of Oregon