February 1, 2017 - The American Civil Liberties Union Foundation of Oregon (ACLU of Oregon) and Immigrant Law Group PC filed a lawsuit today in federal district court challenging President Trump’s Muslim and refugee exclusion order. The complaint was filed on behalf of Unite Oregon, a social justice organization whose members include Muslim immigrants and refugees. The document may be read in full below.

The groups say that lawful immigrants, nonimmigrants, and refugees are being detained because of their religion and national origin without due process of law and without access to counsel. The complaint seeks to ensure access to counsel at Portland International Airport for those subject to interrogation and detention and to enjoin enforcement of Donald Trump’s January 27, 2017 executive order.

“Trump’s order is immoral as well as unconstitutional, and does not reflect the values of Oregonians,” said Mat dos Santos, legal director at the ACLU of Oregon.

The ACLU of Oregon opened a hotline for travelers after the executive order that barred refugees and people from seven majority Muslim countries went into effect. They said that they and other groups had pro bono counsel available at Portland International airport, but the government has unlawfully denied access to those being interrogated and detained.

“Portland International Airport is Oregon’s gateway to the world,” said Stephen Manning, partner at Immigrant Law Group, and co-counsel on the filing. “The exclusion of Muslims and refugees closes that door for families, for businesses, universities, medical institutions, and more.” 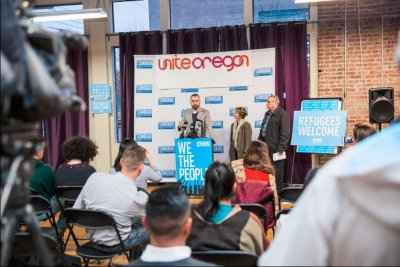 Muwafaq Alkattan, Unite Oregon staff member and Iraqi refugee, said the travel ban meant that his family members would  miss out on important milestones in his daughters’ lives.

“They won’t be able to attend their college graduations or see them get married,” said Alkattan.

Alkattan said he was proud of his employers’ participation in the lawsuit on behalf of immigrants who otherwise might be afraid to speak up.

“Today’s lawsuit gives me hope that America might someday feel like a safe place for my family again."

Representing Unite Oregon and its members in the lawsuit are Stephen Manning, Jennifer Rotman, and Jessica Boel of Immigrant Law Group PC in cooperation with Mat dos Santos and Kelly Simon of the ACLU Foundation of Oregon.

Legislature’s passage of HB 4002 to provide overtime protections to...

Excluding farmworkers from overtime pay is a practice rooted in...