EUGENE, Ore. -- The American Civil Liberties Union Foundation of Oregon today announced a settlement had been reached with Douglas County over inhumane conditions in the county jail. In 2017, the American Civil Liberties Union Foundation of Oregon (ACLU of Oregon) and the Criminal Justice Reform Clinic at Lewis & Clark Law School filed a federal lawsuit against Douglas County and their private medical services contractor, Correct Care Solutions, on behalf of Roseburg resident Terri Carlisle. The ACLU of Oregon today filed a motion to dismiss the lawsuit against Douglas County in United States District Court for the District of Oregon, Eugene Division. The suit against Correct Care remains ongoing.

During a six-month sentence at the jail in 2015, then 57-year-old Carlisle was moved for six days to a booking cell as a punishment after a cell search revealed she had salt, a pencil sharpener, fingernail clippers, ibuprofen, a stool softener, and a single nerve pain pill for which she had a longstanding prescription. She was accused of hoarding medication. As a result, the Correct Care doctor also discontinued her pain medication—ibuprofen and nerve pain medication—for the remaining two months of her sentence. Correct Care’s doctor would not reinstate Ms. Carlisle’s pain medication despite her excruciating nerve pain, repeated complaints to staff, and a plea from her long-time family doctor that she be allowed to take her needed medication as prescribed. The Eighth Amendment prohibition on cruel and unusual punishment prohibits denying incarcerated patients medically necessary care.

Carlisle said the intake cell was crowded with up to 12 women and was “hot, filthy, and the smell was so bad it was difficult to breathe.” She said she and the other women were denied showers and had to eat next to the toilet where women vomited and had diarrhea. She said the women had to beg for toilet paper, and one woman bled onto her clothing and had to wait a number of hours for feminine hygiene products and clean clothes.

“We were left in our own mess for hours at a time,” Carlisle wrote in a blog on the ACLU of Oregon website. “I went six days without a shower. I was denied phone calls or outgoing mail. Again, there is a difference in punishment which I feel I deserved, and abuse, which I did not deserve.”

Under the settlement agreement, the Douglas County Sheriff’s Office agreed to conduct and document weekly meetings between the jail commander and the medical staff, document how often people in their care are allowed to shower, document how often the holding cell is cleaned, and to reduce the intake cell capacity from 12 to nine. The jail also must ensure access to feminine hygiene products upon request and at no cost to prisoners, a policy the Oregon Legislature is currently considering putting into place for all jails and prisons in the state via House Bill 2515.

“As a society we say we use jails to hold people accountable for crime,” said Kelly Simon, staff attorney at the ACLU of Oregon. “But all too often, people in jails and prisons are made to suffer in violation of basic human rights and constitutional protections. Nearly every day, we hear from people who are incarcerated or from their loved ones about lack of needed medical care, mistreatment and poor conditions in Oregon’s county jails and state prisons.”

“I hope the settlement is a signal that the Douglas County Jail and sheriff are willing to hold themselves accountable, although we continue to have serious concerns about their commitment to these values,” Simon said.

Last month, a viral bystander video showed a person, who appeared to be experiencing a mental health crisis, laying outside the Douglas County Jail’s intake door while partially naked. A witness said they saw jail staff callously push the person out of the door before throwing their personal items on top of them.

“Before seeing that video, I was hopeful that people were being treated more humanely at the jail,” Carlisle said. “After seeing it, I was sadly disappointed. It's heartbreaking.”

Simon said the ACLU of Oregon remains committed to the rights of prisoners in the state.

“We will continue to fight for increased oversight and transparency in Oregon’s jails at the legislature, through public education, and, if necessary, with more litigation.” 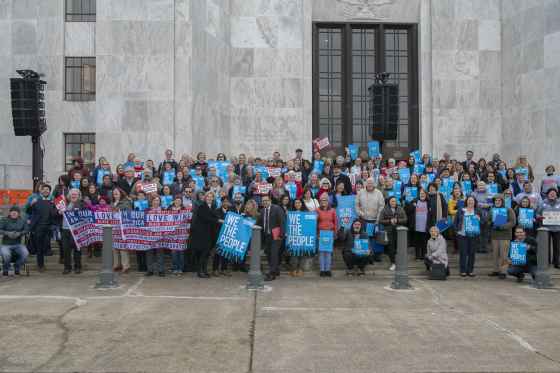