CONTENT WARNING: The following information includes instances of racism and anti-LGBTQ+ language, particularly in the timeline and in the complaint of the case.

PORTLAND, Ore. — On December 17, 2021, the ACLU of Oregon, along with cooperating counsel at Davis Wright Tremaine, filed a lawsuit against the Newberg School District (“District”) and Newberg School Board members David Brown, Brian Shannon, Trevor DeHart, and Renee Powell on behalf of client Chelsea Shotts, a staff employee with the District. In the lawsuit, Ms. Shotts asks the court to declare that her display of a rainbow sign with a heart and the words “Be Known” in her classroom window is protected by the Oregon Constitution. 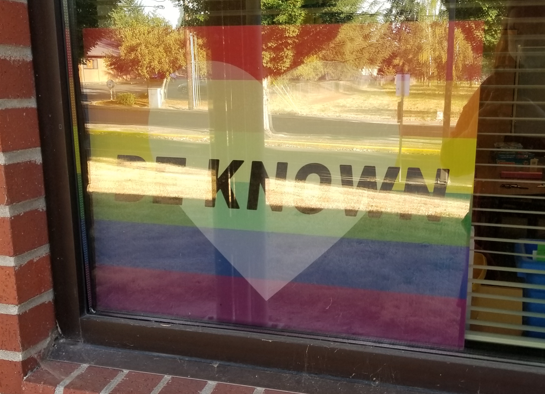 In August 2021, school board members Brown, Shannon, Dehart, and Powell directed the development of a policy banning political displays including Black Lives Matter and LGBTQ+ Pride signs at the Newberg schools. The policy that was developed prohibits District employees from displaying posters or signs with “political, quasi-political, or controversial” topics (the “Policy”), and it was adopted by those four board members on September 28, 2021.

Two days later, on September 30, 2021, an individual living in the Newberg School District area submitted a complaint claiming that Ms. Shotts’ rainbow heart display violated the Policy, referring to “what purports to be a gay pride poster displayed in what seems to be a classroom window at the Dundee Elementary School.”

In the lawsuit, we ask the court to enjoin enforcement of the Policy and find that the Policy violates Ms. Shotts’ rights under Article I, sections 8 and 20 of the Oregon Constitution. These provisions protect free expression, require equal treatment under the law, and ensure laws are not vague. Ms. Shotts is not asking for financial compensation.

Newberg School District Staff Member Chelsea Shotts said:
“As a queer staff member, I deserve to be safe from discrimination and hate, but even more important to me, queer students deserve to be safe and supported. I will do everything in my power to create an environment that makes all students feel safe and supported so they can learn and thrive. I wish the entire board would join us in these efforts.”

The ACLU of Oregon Legal Director Kelly Simon said:
“Throughout American history, people in power have defended white supremacy and other discriminatory systems under the guise of neutrality. The tactics of the four member majority of the Newberg School District are eerily similar to those used to resist racial integration in public schools. We believe the policy is a poorly veiled attempt to prohibit messages of support for Black and LGBTQ+ students and make their identities political. That is not neutral. Every young person deserves a free, safe, and inclusive education, and the ACLU of Oregon will support the efforts of young Oregonians and their allies to protect that right in the courts, in the legislature, and with our people power.”

Timeline of incidents related to Newberg School District:
The following timeline of events show an environment at the Newberg schools that is harmful to Black and LGBTQ+ students, as well as to teachers and staff trying to create a safe and inclusive learning environment for all students:

Lawsuit:
A copy of the complaint filed in this case is available at this link.

About ACLU Oregon:
The ACLU of Oregon is an affiliate of the national ACLU which has affiliates in 50 states, Washington, D.C. and Puerto Rico. The ACLU of Oregon is a nonpartisan, nonprofit membership organization with more than 28,000 members statewide. The organization works in the courts, in the legislature, and in communities to defend and advance our civil liberties and civil rights under the U.S. and Oregon constitutions and the laws of the United States and Oregon.

Statement from the ACLU of Oregon on the Banning of Black Lives...

ACLU Backs Oregon Court for Protecting Lesbian Couple who were...

Students Have the Right to #TakeAKnee

Transgender Woman Wins Her Fight for Fair Treatment and Medical...