PORTLAND, Ore.— The Oregon Court of Appeals will hear oral arguments in Klein v. Oregon Bureau of Labor and Industries (BOLI) on Thursday, January 9 at 1:30 p.m. at the Oregon Supreme Court Courtroom at 2850 Broadway St NE, Salem, Oregon 97303. *Seating is limited. The court will live stream the arguments here: http://oregoncourts.mediasite.com. See attached order for more information about the live stream.

The United States Supreme Court sent the case back to the state court after the ruling in Masterpiece Cakeshop v. Colorado Civil Rights Commission. In Masterpiece Cakeshop, the Supreme Court overturned a Colorado ruling against a baker who refused to serve a gay couple because the government exhibited anti-religious bias in reaching its conclusion that the baker violated Colorado’s non-discrimination law.

The ACLU of Oregon filed a friend-of-the-court brief that argues that BOLI’s actions in the Oregon case did not exhibit hostility to religion, that state anti-discrimination laws protect Oregonians who are refused service based on their sexual orientation, and that the Oregon court should reaffirm its original decision.

P.K. Runkles-Pearson, a partner at Miller Nash Graham & Dunn LLP, represented the ACLU of Oregon pro bono, and had the following comment:

“Religion is not a license to discriminate. Longstanding Oregon law protects people from discrimination in accessing publicly available services. The Oregon court made the right decision the first time around. The ACLU will continue to fight to ensure that all people are treated fairly in Oregon.”

“We support religious freedom as a fundamental value in America – but freedom of religion is not freedom to discriminate, target or hurt others. We’re hopeful that the Oregon courts will uphold the Oregon Equality Act, as they did in previous rulings, so that all Oregonians can live free from discrimination, whether they’re buying a cake for a wedding or going to work. We thank the Bowman-Cryers for their courage and for standing up for all of us.”

The ACLU of Oregon brief is online at https://aclu-or.org/sites/default/files/field_documents/amicus_aclu_or_sweetcakes_boli_09192019.pdf. 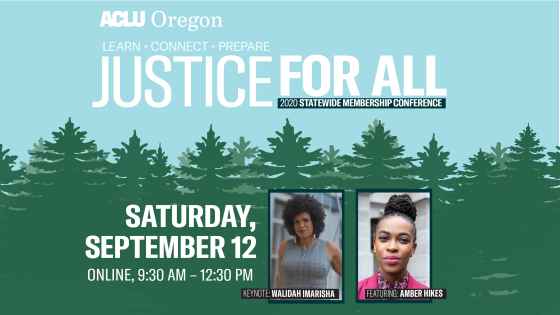