Keeping Portland out of the Joint Terrorism Task Force

This week, we welcomed Michael German, a former FBI agent and current fellow with the Brennan Center for Justice, to Portland to discuss problems with the Portland Police Bureau’s membership in the FBI’s Joint Terrorism Task Force (JTTF).

State law protects Oregonians from being surveilled by state and local law enforcement based on their religious, social, or political affiliations without reasonable suspicion of criminal conduct. These crucial protections were put into place to prevent profiling and to safeguard our First Amendment rights.

The FBI doesn’t have any such prohibitions on surveillance, as their own policies no longer require “reasonable suspicion” to engage in intrusive investigations. We also know that they regularly target members of our community based on religious or political activities and perceived immigration status.

By withdrawing from the JTTF, Portland can stay true to its values and protect our rights. For example, after 9/11, then-Attorney General Ashcroft ordered interrogations of Muslim men across the country. But in Portland, the police refused to help with the discriminatory investigations based on religion.

But as it stands now, we don’t know anything about what the officers assigned to the JTTF are up to. That’s because the JTTF operates under a veil of secrecy, which is particularly troubling considering its history of civil rights abuses.

And we have every reason to believe the JTTF is engaging in prohibited and discriminatory activities. For example, JTTF officers have been monitoring Black Lives Matters protesters throughout the country.

On Wednesday, Michael German and I testified to Portland City Council on just this issue.

WATCH: Kimberly McCullough and Michael German testify to Portland City Council on why the city should withdraw from the JTTF.

“Police officers assigned to the JTTF would find it extremely difficult, if not impossible to comply with Oregon law while conducting routine operations under the FBI’s current counterterrorism authorities and practices,” German explained in his written testimony. “Moreover, the FBI exercises these expanded powers in nearly complete secrecy, giving overseers, the public, and victims of abuse few opportunities to challenge them for legality or effectiveness.”

Portlanders have long opposed our membership in the JTTF. Now, under a president who targets people based on their religion (Muslims), national origin (immigrants), and political beliefs (protesters, Black Lives Matter), it is more important than ever to stop participating in the JTTF's dragnet surveillance and spy program.

That’s why we have joined with numerous other advocacy organizations to call on the City of Portland to once again withdraw from the JTTF. 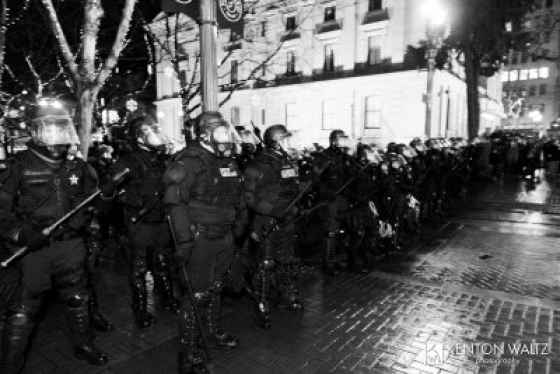 Forum: Why Portland Should Get Back Out of the FBI's Joint...